When you stay mindful, your world will become more colorful and your life more intense. To be mindful means to open yourself to the wonder of now in a relaxed way. Mindfulness naturally leads to serenity and joie de vivre. In serene equanimity and mindfulness, the greatest power of all opens up: love.

..... 40 years ago, we took to guitar (Aljoscha) and double bass (Ronald) to make music together. In the late 70s and early 80s we sang and played in the streets of Munich.
Since then we are friends – and since 1989 we are also colleagues as authors. First we wrote books about eastern Traditions, like Yoga, Taiji or QiGong. Then we became interested in alternative medicine. Since about 2000 we are concentrating on the topics "mindfulness", "happiness", "equanimity" and "(self-)compassion".
Mostly we write non-fiction; meanwhile we've published more then 50 titles. And we also write novels...

Our books have been translated into more than 16 languages, among them Japanese, Chinese, Norvegian and Latvian ...

Our App which helps to practice mindfulness – KURMA. New version now available for iPhone and Android.

Ronald was born 1962 in Lausanne, Switzerland – to Dutch and Belgian parents. He studied music at the Richard-Strauss-Conservatory in Munich and later was a member of different orchestras, e.g. the Münchner Symphoniker. His instrument is the double bass and he is co-founder and member of the ensemble of the Chamber-opera Munich (Kammeroper München). He lives as a freelance writer, musician and meditation teacher with his wife and their three children in Munich. 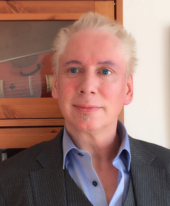 Aljoscha was born 1961 in Bonn, the former German capital. He studied in Toronto, Canada and Munich – a variety of majors: among them philopsophy, psychology, linguistics, musical education. He is a certified psychologist (Dipl.Psych.). Aljoscha is a member of Mensa since 1986, he is instructor for several martial arts, e.g. jujutsu, fencing, taijiquan and wing chun. Since 1989 he lives as a freelance writer, composer and teacher in Munich and Nanning (China).